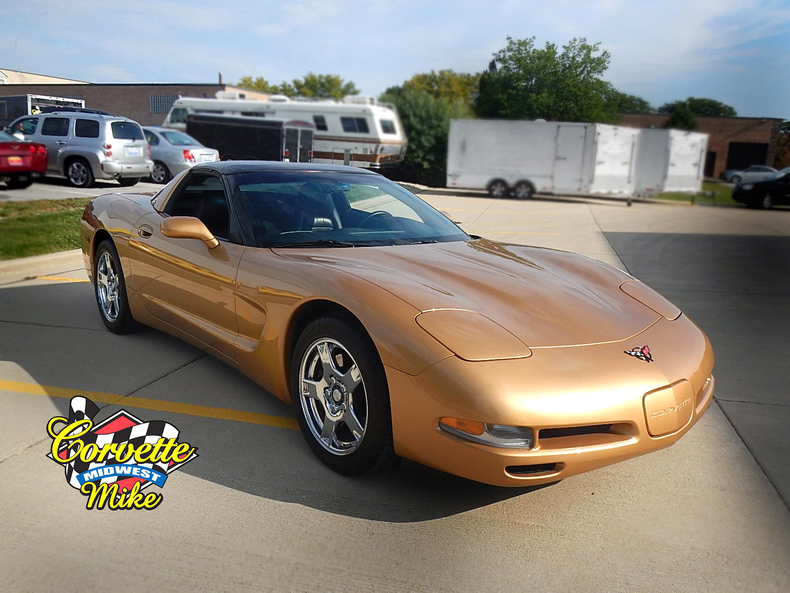 This is a very rare C5 1997 Corvette. GM was experimenting in 1996-1997 with various paint combinations including RPO 58U Aztec Gold. Chevrolet was working with the paint supplier DuPont developing this paint tone, hue and shade, but it was never mass produced or made available to the general public. Later, it was rumored it might be saved for the 2003 50th Anniversary Corvette.

Here's why its one of the rarest C5 Corvettes on the planet. There are only 15 Corvettes painted this color and none were sold directly to the public. While working with DuPont the factory produced the cars in 3 separate paint-runs of 5. This Corvette was signed by Will Cooksey, the Bowling Green Plant Manager as #06. After being completed the cars were sent to GM for evaluation then later sold through an auction to select Chevrolet dealers. These Corvettes remain mostly in the private collections of those dealers.

The previous owners of the C5 maintained it to very high standards it looks like new. This car has an automatic transmission, performance axle memory drivers seat, dual zone A/C, black interior with sport seats, transparent top and fog lamps. It has also been updated with an aftermarket exhaust system and chrome factory wheels.

It's not often you can own a rare factory concept car for such a reasonable price. This will be a great addition to any Corvette collector and quite special to enjoy on the road.

Please call Bob or Marty at 630-230-0441 or visit CorvetteMikeMidwest.com - Bob is our Sales Manager and a former NCRS judge.

Thank you! We will be contacting you soon.
Thank you for your interest! We'll get back to you soon!
© 2021 Corvette Mike Midwest
Privacy Policy
Powered By SpeedDigital